Medical cluster at Skolkovo IC: the first clinic will be Hadassah 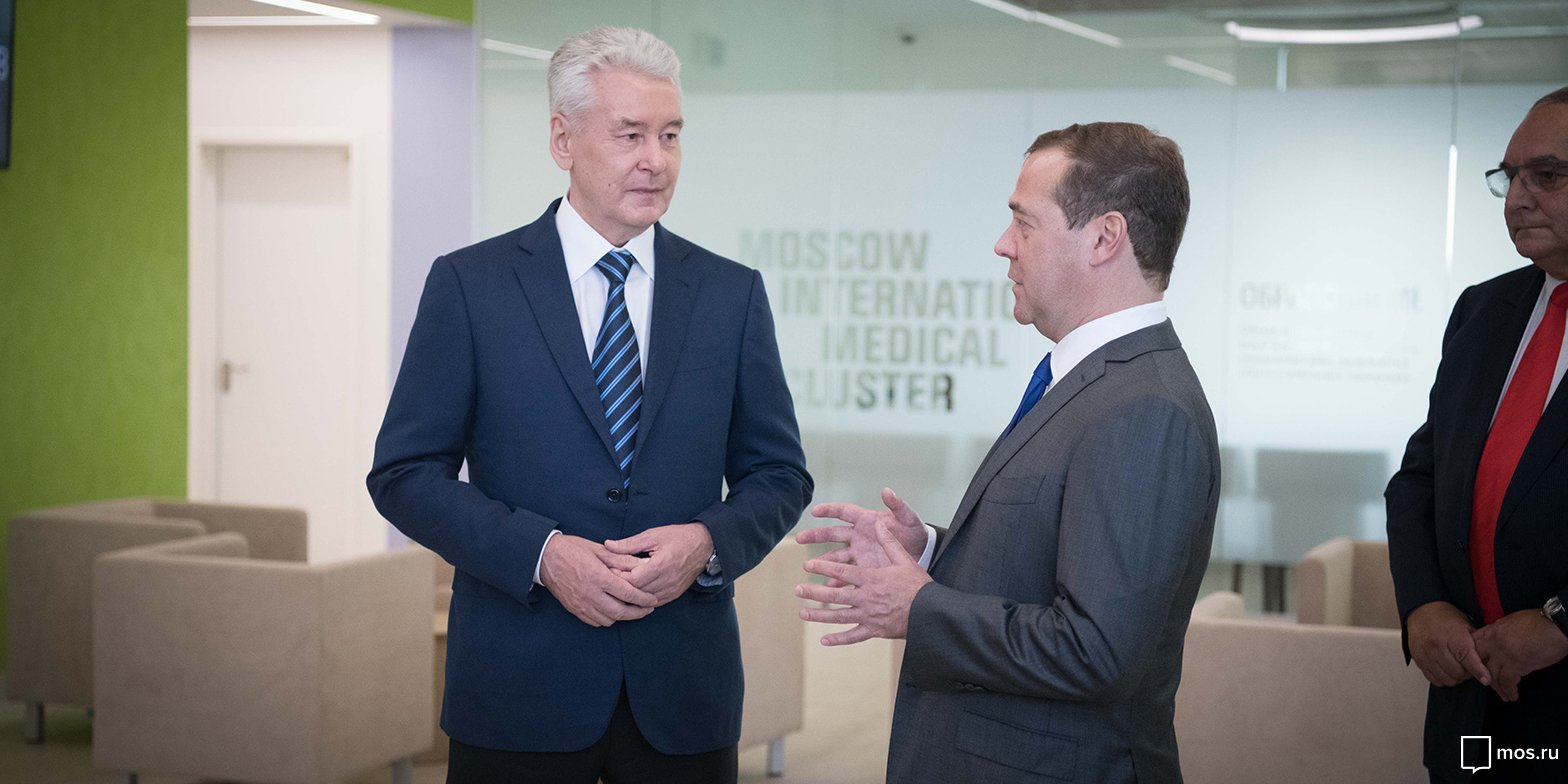 Source: Mos.ru
Photo: Moscow Mayor Press-office, Evgeny Samarin
The Diagnostic center of Hadassah Clinic will be opened on 5th, September at the territory of International Medical Cluster. In the run-up to this event the Prime Minister of Russian Federation Dmitry Medvedev and Moscow Mayor Sergey Sobyanin visited Skolkovo Innovation Center.

'The most important – is to cure a person, give the necessary knowledge to a physician, specialists, provide the necessary medical equipment. It seems to me that it has been done here successfully' – pointed Dmitry Medvedev.

'There were many discussions: if the cluster is needed or not, will it be useful or not. In 2015, the law was adopted, during the year we selected the first partner for the medical cluster - the Israeli leading clinic Hadassah and within a year and a half we built the Clinic, provided it with new technologies and equipment,'- said Sergei Sobyanin.

Federal law No. 160-FZ, according to which commercial clinics of the International Medical Cluster can invite foreign doctors, apply foreign technologies, equipment and medicines, was adopted in June 2015.

The main advantage for foreign medical organizations will be the opportunity to work according to the standards adopted in the OECD countries, without obtaining Russian licenses.

The oldest Israeli clinic Hadassah became the operator of the clinic. In a four-storey building with a total functional area of 10.5 thousand square meters are located:

In addition, the building is equipped with a conference room with LED video walls, where congresses, presentations, seminars, videoconferences can be held. In the building there is also a café for 100 seats, a kitchen with auxiliary rooms, a winter garden-atrium with a public zone and a cafe for 100 people, a laundry, a training simulation center, an administrative block.

The clinic will employ about 100 people, 26 of them with diplomas from OECD countries. In 2018-2019, the staff of the Moscow clinic will be trained at the Hadassah University Hospital in Israel.
For patients: world standards and personal coordinators

Patients of the clinic will be able to get a full cycle of modern diagnostic tests for the prevention and early detection of diseases. This will take into account the individual characteristics of the body.

In particular, the clinic will undergo programs of complex or oncological screening of diseases (check-up), as well as diagnosis of the cardiovascular system, gastrointestinal tract, other organs and systems. Also, patients will be able to use remote consultations and receive a second opinion from the specialists of the Moscow and Israeli clinics Hadassah.

The clinic will provide services in accordance with the world medical standards accepted in the Israeli Hadassah. Patients of the clinic will be accompanied by personal coordinators - personal assistants, who will solve all emerging issues.

Thus, Russian doctors and nurses will be able to study in Israeli clinics in the areas of oncology, radiation oncology, molecular genetics and others. The training will take from two weeks to two years.

In Moscow, it is planned to hold regular seminars for up to seven days on topical issues of health development. Training and simulation center in a medical cluster in Skolkovo will allow to develop complex professional skills on specialized equipment.

At the second stage of development in the Hadassah Moscow clinic the therapeutic building will open. It is planned to build it by 2020.

In the therapeutic building will operate a multifunctional medical center, the main specialization of which will be oncology. Patients will be able to undergo multi-stage treatment, rehabilitation, preventive medical diagnostics in accordance with the standards adopted in Hadassah University Clinic. Deputy Director for Medical Affairs Alexander Gagaev stressed that there will be used technologies that allow in the early stages to identify pathologies that can lead to a heart attack.

Only electronic medical records will be used here. 'There should be everything, including tomograms, all tests, everything that is connected with the diagnosis of the patient,' said Dmitry Medvedev.

Sergei Sobyanin stressed that the electronic card is, in fact, the patient's personal account: it should be used not only for writing, but also for storing data that needs to be protected. 'The protection goes according to two federal laws: the law on the protection of personal data and the law related to health,' said the Mayor of Moscow. Dmitry Medvedev added that only the patient and his doctor should use the card.

In addition, all major clinics of the capital plan to integrate into the UMIS system by the end of the year. 'Already from next year, data from outpatient studies, data from complex diagnostic studies of CT, MRI and the entire medical history associated with staying in a hospital will be loaded into electronic maps,' Sergei Sobyanin said. He also noted that for today six million medical electronic cards have been created in Moscow, but by the end of the year there will be about eight million.

The plans are to merge the medical card with the patient's personal account. 'We are ready as an experiment, to collect this huge amount of data on the basis of medical records. This is not just convenience for the patient. Based on these large data, it is possible to develop algorithms to help the doctor to diagnose,' said the Mayor of Moscow.

In a single UMIS database, 12 million patients are now stored, which means that the city has everything it needs to take further serious steps in this direction.

'This will be a full-fledged medical card, which, accordingly, will be available in the UMIS system to patients and with the patient's consent to the doctors,' the Mayor of Moscow said.

In addition, work is in progress on the Simulation center to transfer it to Hadassah. 'A significant part of doctors will go to Israel, there to receive the appropriate education, for us it is also very important. And the clinic itself, of course, is also important. They will get knowledge about new technologies, organization of health care, technology will be exchanged,' Sergei Sobyanin added.

The oldest clinic in Israel

The medical center Hadassah was opened in 1912. Now it is the leading institution of public health services in Israel. It includes two clinical hospitals - Hadassah Ein Kerem and Hadassah Har-ha-Tsofim. They largely shape the standards of the modern Israeli health care system.

It is with the center of Hadassah that the largest achievements of Israeli medicine are connected. In his hospitals for the first time in the country, successful heart transplantation, a robotic operation and the world's first hip replacement using computer navigation were carried out.

In the new century, the center gained fame thanks to the projects of tomorrow's medicine and the combination of an individual approach to patients and the latest technological developments.

Hadassah is the clinical base of the medical faculty of the Hebrew University in Jerusalem. Together with the university they provide an opportunity to get education and pass clinical specialization in medical school, as well as in schools of nursing, dentistry, public health and occupational therapy.

Today, about 800 doctors and 2.2 thousand nurses work in the clinical departments of Hadassah. In the hospitals of the medical center there are more than 1,1 thousand hospital beds, 31 operating rooms and nine specialized intensive care units.

Every year more than one million people apply to Hadassah.

The best clinics in the world - in Skolkovo

In September 2016, the concept of development of the International Medical Cluster in Skolkovo was approved. The area of construction will be more than 400 thousand square meters.

An agreement with the Bundan Hospital of the Seoul National University is expected to be signed in the near future. It will participate in the project to create a multi-profile clinic 'Smart Hospital of the Future'.

In addition, the preparation for signing an Agreement with the Spanish clinic 'Roman Fernandez' on the organization of an oncology center in the International Medical Cluster is being finalized. Leading Spanish doctors who use the latest medical advances and technologies will be invited to work there.